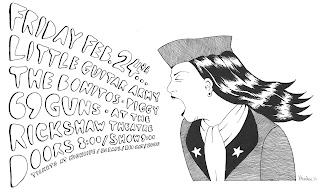 POSTER BY BRITTA BACCHUS
Posted by lee bacchus at 1:22 PM No comments: 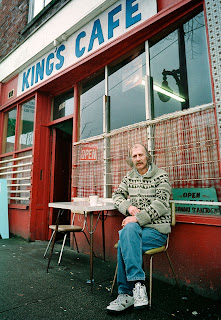 GENTRIFICATION AND THE NEW URBAN COWBOYS

"Trendy." "Hip." "Cutting-edge." "Slick." "Renewed vibrancy."
You won’t find many discouraging words in Ian Bailey’s feature Hip Spots and doughnuts in the Downtown Eastside (Globe & Mail, Saturday Feb. 18). The tone is positivist in Ayn Rand spirit and the message is simple: young middle class hipsters and novice entrepreneurs (Cartems Donuterie, Calabash Bistro, the Bitter pub, Save-On Meats Diner ) have nothing to fear amid “the home to thousands of intravenous drug users.”
“I don’t think it’s scary like it was,” Ian Tostenson, president of the BC Restaurant and Foodservices Association, declares in Bailey’s piece.”It really is — good food. And it’s safe. “ I mean, I’m not saying you go down the back alleys, but I wouldn’t go down the back alleys of Granville Street for God’s sake.”
Like most proponents of creeping gentrification, the message seems to be win-win: Affordable rent for modest restaurateurs, and a fresh and edgy experience for patrons in, as Bailey describes it, “the new community of cool.”
Yes, it’s a Bob Rennie wet dream come true. Low rents, chic eateries and a “revitalization” of ‘one of Canada’s poorest, most chaotic neighborhoods.”
Oh, happy days!
The problem with Bailey’s feature, and the problem with the Vision-steered architectonic makeover of the Downtown Eastside, is that it throws an invisibility cloak over the thousands of long-time residents of the area, most of whom are NOT intravenous drug users. Poor, many may be, and therefore all the more reason to consider their vital stake in this civic/development shakedown and profit bonanza that is the underlying raison d’etre of the fashionably black heart of gentrification.
Look in the historical rear-view mirror and you’ll see an eerily similar trendy trend that overtook the Lower East Side of Manhattan in the late ‘80s — a poor, traditionally Latino neighborhood. At least there were protests (very much an embryonic version of Occupy that staked its tents in Tompkins Square Park) against the gentrification that resulted in rent gouging, evictions and displacement of the residents and small storefront businesses that had made the Lower East Side vibrant in its own right, but of course now is bears the cleansed name of “East Village,” everything real-estate mandarins like Rennie and “ethical” architects like Henriquez (Woodward’s) would like to see evolve in the Downtown Eastside — a “cutting-edge” “hip” landscape for the chic-seeking white-collar set.
Just as in the Lower East Side, developers salivating over the profit potential of the Downtown Eastside have already enlisted artists and art-patrons (along with the boutique eateries) to lubricate their penetration and eventual occupation. I mean if artists like it, then it must be ethical, right? Just ask Rennie.
I’ll leave the backstage dynamics to urban geographers like Neil Smith (The Urban Frontier: Gentrification and the Revanchist City), who could outline how developers and banks allow dis-investment in an area, then establish a beachhead (in our case, perhaps Woodward’s) and swoop in and predatorily purchase distressed properties at fire-sale prices — then either flip them as values rise along with re-investment, or raise high the roof beam of edgy condos for the young, new hipster middle class, again driving up rents and driving out many of those who don’t recognize bare-brick walls or peeling paint as aesthetic accoutrements. And this despite the developer bribery of including a token number of low-income units among the market price digs.
The overall effect is one of contrived amnesia.
All of this re-colonization (think of the residents as “savages” and the gentrifiers as the “pioneers”) is witnessed (as in Bailey’s article) from the vantage point of the pioneer.
Not one word in the Globe feature comes from the mouth of any DTES resident. And none from any of the long-time small business owners, some of whom I know are already closing or moving because of escalating rents.
Twenty years ago, when New York City was in the throes of a similar phenomenon, Peter Marcuse, an urban planner at Columbia University, said:
“The opposite of gentrification should not be decay and abandonment but the democratization of housing.” 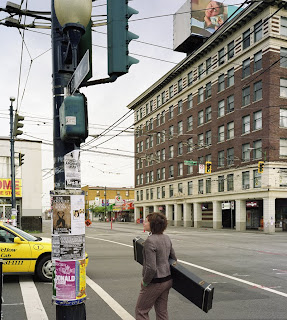 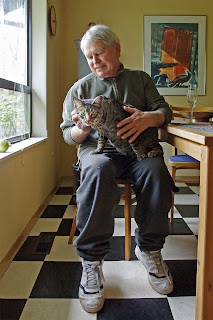